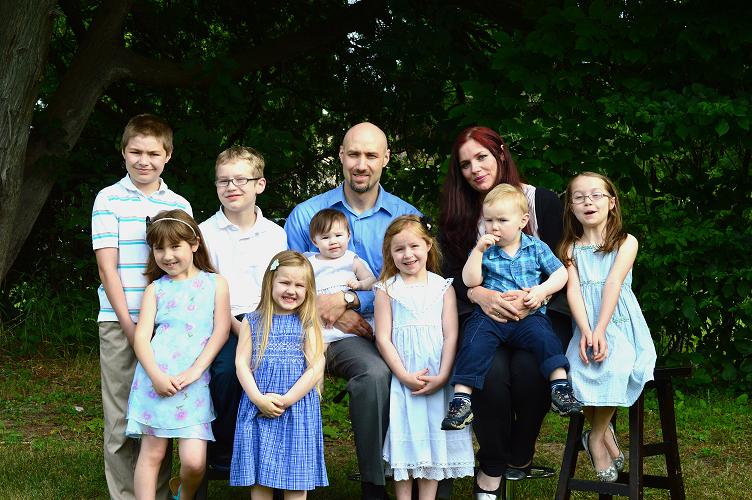 These are adventurous times!

I’m having twins, so my midwives have referred me to an OB.  I’ve been dreading my first appointment with him, and I’m not disappointed.  He reads my history. “Eight children at home, the oldest is only eleven years old, five past miscarriages, and twins on the way.  I have to ask the question… contraception?”

I smile and heave a sigh.  Oh where do I begin!?!  I know I can’t jump into the enormity of reasons that have led me down this path.  They are part of a sweet and wondrous journey.  Years of growing into a fuller understanding of the feminine genius, the beauty of motherhood, the constant love and provision of God, the huge impact of small offerings; changing diapers, sacrificing sleep, playing referee to disgruntled tots, laundry and more laundry, and you know, generally dying to myself.  Even the pregnancies themselves have become a little more complicated, after having lost babies due to low progesterone, my pregnancies consist of 2-4 shots of progesterone every week, from positive pregnancy test into the third trimester.

By all accounts, I’m crazy!  And it’s exceedingly difficult to explain this (sadly rare) lifestyle to anyone who doesn’t share the understanding of the depth of love and blessings that flow from this call to be open to life.  Sorry, I have to pause for a moment, as my four year old is insisting I watch her impression of Barbie falling off a speedboat… Done.

So, I answer the OB in a calm, non “religious-fanatical” tone.  “I’ve been practicing NFP. I’ve used the method both to achieve pregnancy, as well as to avoid pregnancy, as in the case where I miscarried several babies and needed to postpone conception for several months (until my hormone levels were more ideal for carrying a child to term).”

He smiles, the way I smile when someone looks at my numerous offspring and asks if they’re all from the same father.  He asks, “Is it for religious reasons?”  I answer that it is, but also I believe that it is the healthiest way to manage my fertility with the bonus of not consuming a group 1 carcinogen (right up there with asbestos).  He raises his hands in surrender, “Alright, alright, I understand.  I just had to ask.” I continue, “I know it’s unusual, but I really love this life.  Each of my children is so unique and irreplaceable.  I’m really excited to meet these new little ones.”  I see a spark in his eyes.