A Grace on the Mount of Beatitudes 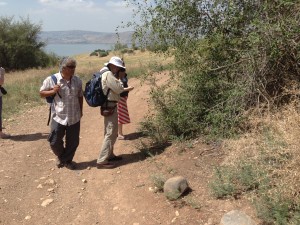 erry was sitting beside her husband at the outdoor Mass we attended on the Mount of Beatitudes. She leaned into Chris’ side and felt the joy of praying the Mass with him, the enormity of hearing the words of the divine liturgy on this mountain where Jesus Christ proclaimed the Sermon on the Mount. Then, Terry suddenly reached up and swiped at the back of her neck as though she had been stung.

It was no bee.

When I looked behind her, I had to smile. The branch she had just swept away was from the Zizyphus Spina Christi plant, a tree believed to have been used to make the Crown of Thorns that was placed on Our Lord’s Sacred Head before the crucifixion.

The significance of that moment on the Mount of Beatitudes and the grace of being pricked by the thorns of that plant in the middle of Mass still resonate with me. Yes, it was a grace … is a grace to share in His Passion, just as it is a grace to share in His Resurrection and triumph over death and sorrow and little pricks of pain from countless things that trouble us. A little thorn on an obscure branch on a hill where the gospel was proclaimed and is still proclaimed today.

The thorns were not big, like those we imagine or see in Hollywood depictions of that day. They were little. So sharp. Like needles, but so small that one has to look closely to see them. The first time I visited the Holy Land and walked along that Mount of Beatitudes, I paused to snap a little branch from one tree as we descended the mountain and approached the Sea of Galilee below.

The thorns pierced me three times, drawing blood. It was painful, but I had to laugh at the irony of it. Such a little thing, this thorn.

Such little things to cause such pain. And there was a little joy in knowing I was sharing in a very small way in the pain my Lord had experienced. I treasured that little thorn. It is now between the pages of my Bible – resting in the crevice of a page that tells about the Passion and a crown of many thorns. 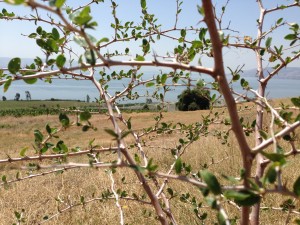 As we approach Lent, I am thinking again about the Mount of Beatitudes and the Zizyphus Spina Christi plant.

I am thinking about our thorns, the countless sufferings we embrace and consider a share in His great suffering.

I think of Our Lord, who walked down that same mountain, passed thorny plants such as these, and yet had His eyes on the path that led all the way to the Cross of Mount Calvary.

Oh, my Jesus. Let me take up your suffering and wear it with you.

Let me see each prick as a grace.

And let me say what you said.

Thy will. Only Thy will.