8 Bad Reasons to Leave the Catholic Church, and 1 Good Reason to Stay 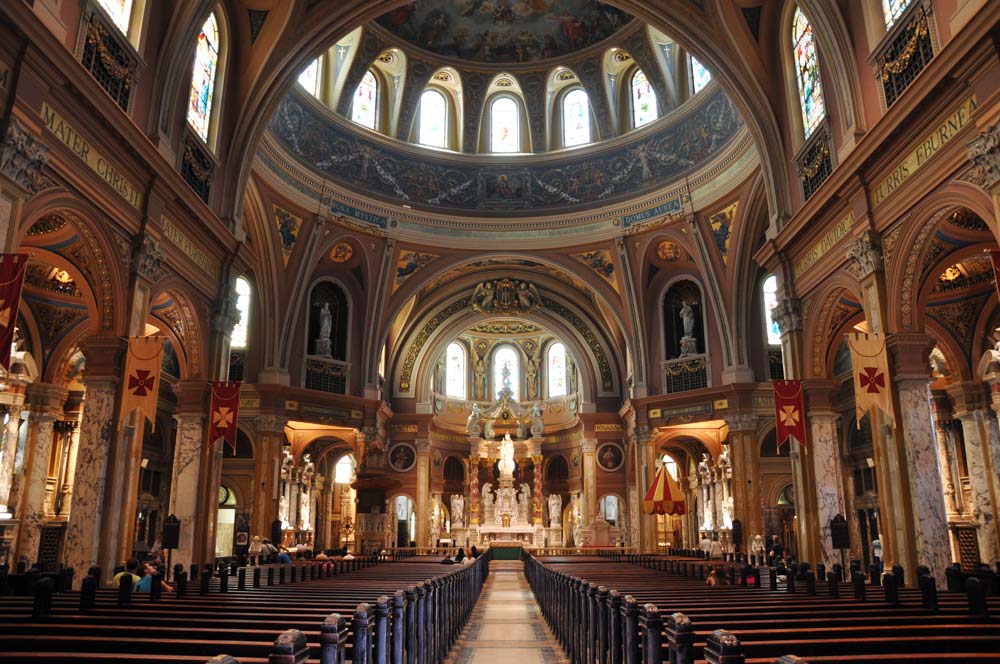 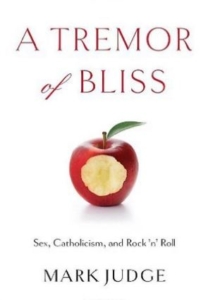 In May 2015, Mark Judge published a column over at RealClearReligion titled “Why I Left the Catholic Church.” Judge, a columnist at The Daily Caller and the author of A Tremor of Bliss: Sex, Catholicism, and Rock ‘n’ Roll, explained why he made the decision to leave the Church founded by Christ:

IT’S BECAUSE HE’S AN ARTIST.

Judge was discouraged by what he considered the Catholic Church’s “negative, obstructionist, and soul-crushing” attitude towards the arts.  As an example of the way to win souls, Judge cited St. Augustine–who wrote “entire volumes” about paganism, thus winning pagans to the gospel. In contrast, Judge bemoaned the fact that the Catholic Church has not a single think tank to support the arts. Explaining his departure, Judge wrote:

In the end, I left the Catholic Church because as an artist I could no longer hold out hope that there would be a place for me in the church. The Catholic Church, which gave the world the Sistine Chapel, Dante, and the genius filmmaker Robert Bresson, has lost interest in supporting artists. God is a dynamic and creative universal force who can be found in movies, rock and roll, and poetry

OH, WHERE TO BEGIN?

In the first place, I think Mark is dead wrong. The Church remains the world’s foremost patron of great art. Yes, we still have the fathomless beauty of Michelangelo’s Pieta and the profound Scriptural lessons expressed on the stuccoed ceiling of the Sistine Chapel. But modern-day artists continue to create.

I’m thinking of this beautiful statue, representative of the “invisible poor,” which I photographed while at the Cathedral in Salzburg, Austria in 2000. 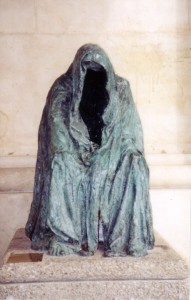 And there is the contemporary work of Canadian sculptor Timothy Schmalz, who created the “Homeless Jesus” statue depicting Christ sleeping on a park bench.

Or this (so sorry I forget its name) photographed during my 2003 tour of the Vatican Gardens: 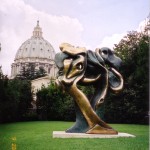 You prefer music? Well, this is not to my taste–but Pope Francis did, after all, invite both Sister Cristina Scuccia (of Italy’s “The Voice” fame) and American punk rocker Patti Smith to perform in the Vatican’s Christmas concert. Also at Christmas, the creche in St. Peter’s Square was graced with the presence of statues reminisccent of the lighthearted Italian comic opera “The Elixir of Love.”

“with those to whom religion is something foreign, to whom God is unknown and who nevertheless do not want to be left merely Godless, but rather to draw near to him, albeit as the Unknown.” (Benedict XVI, Speech to the Curia, 21/12/2009) ; follow through on those which are undertaken by various institutes of the Church in the field of dialogue and, so far as necessary, lend them assistance (art.168).

Mark Judge hungers for good art–and I insist that it’s all around him.

Perhaps he hasn’t yet toured the Vatican Museums and Vatican Gardens, where he would find not only the medieval masters but also great works by contemporary artists. Perhaps his local parish is limited in its musical presentations–with a mediocre organist and a volunteer choir doing the best they could. I’m truly sorry that his experience of religious art has been so sparse that it caused him to flee.

There would be many other relevant examples, drawn from art and music and theater and sacred architecture, examples which stretch beyond the focus of this article.

But more to the point, I’ve got to ask:  “Mark, What Are You Thinking?”

Mark Judge would have done well to ask, as did the Apostles in John 6:68, “Lord, to whom shall we go? You have the words of eternal life.”

Unfortunately, Mark Judge is not alone in his abandonment of the Catholic Faith.

As the recently released Pew Research Center study on America’s Changing Religious Landscape shows, all too many Catholics have been abandoning the Faith. The most recent demographic study shows a drop of more than 3% in the percentage of Americans who self-identify as Catholic.  Only mainline Protestant denominations have experienced a sharper decline.

A lot of people–some well-intentioned seekers and some just disinterested or, dare I say, lazy–have turned away from organized religion altogether and joined the ranks of the “Unaffiliated.” Why? Most have not listed Mark Judge’s beef with the Church, “bad art”, as a reason for leaving.

To help Mark think through his frustration, I thought I’d post here just a few of the reasons I’ve heard from people who once attended Catholic schools and church, but who have since moved on to spend Sunday mornings at the lake or in bed, catching up on their sleep.

Excuse #1. “I don’t get anything out of the homily.”
This complaint actually takes two opposite forms: Some people complain that the priest is a windbag, repeating himself, talking in a monotone, or otherwise bothering them for 20 minutes, making it difficult to finalize the shopping list. Others complain that the priest’s message is too short–only eight minutes. That group actually likes the fact that Protestant preachers continue on (and on) for 30, 40 minutes, and they want more–not less–from their own pastor.

Excuse #2. “The Catholic Church doesn’t offer children’s programming.”
Well, yes they do. Many if not most parishes offer a babysitting service (aka preschool program) for the very young during at least one liturgy. Some also provide “cry rooms” where mothers of rambunctious children can see and hear the Mass, while keeping their screaming infant or exuberant toddlers separated from the congregation. There’s a difference in the Catholic Church, though:  Even though it may be stressful for parents and others when a child is disruptive at Mass, the child is from the earliest years embraced by the community, and is learning the importance of the liturgy. If you have a problem with a noisy child, may I suggest you break down and purchase a few age-appropriate kids’ books on the Mass, so your son or daughter can learn to follow along? And of course, learning about God doesn’t stop there: There’s family prayer time as well as Catholic school or, if that’s not a possibility, weekly Catechism classes.

Excuse #3. “The Catholic Church doesn’t teach the Bible.”
Well, yes she does. In each Sunday liturgy, there will be three Scripture readings: from the Old Testament, the New Testament and the Gospels. There are also bible studies and other study programs offered in classrooms and on-line. Want to see something on-line and have a little fun at the same time? Check out my friend Christian LeBlanc’s “Summapalooza” on YouTube!

Excuse #4. “I like the Women’s Fellowship at the church down the street.”
Well, make some new Catholic friends! Remember the Girl Scouts song, “Make new friends and keep the old, one is silver and the other gold.” Don’t forget the dear women in your Protestant fellowship groups, but come on over and investigate the Council of Catholic Women, the Moms and Tots group, the altar society, the Christian Service Commission, the St. Vincent de Paul Society. Pitch in and sell hot dogs at the parish festival. And of course, there are those other great women who provide encouragement, help and model the Christian life: I’m thinking of Mary, the Mother of God and all the great female saints who intercede for us at the throne of God.

Excuse #5. “The Protestants go on lots of mission trips.”
Oh, yes, remember Campus Crusade for Christ and those great Spring Break trips, hanging around on the beach in the hope of snatching uninformed Catholics and converting them with the Sinner’s Prayer? But the thing is, the Catholic Church has an expansive outreach, with religious sisters, brothers and priests all over the world carrying the message of the Gospel to all nations.  If you can’t go yourself, support these great missionary efforts directly (the Missionaries of Charity, the Little Sisters of the Poor, the Franciscan Friars of the Renewal, and many more), or contribute to the U.S. Bishops’ annual collection for Catholic Relief Services, or the many specific appeals such as the CRS appeal for the victims of the earthquake in Nepal.

Excuse #6. “I like the donuts better over there.”
You enjoy that stop after service for donuts? If your parish doesn’t have an informal gathering after Sunday Mass, consider starting one–or make plans to have breakfast with a few parishioners you’d like to know better.  And really, are donuts more important than Christ in the Eucharist, body and blood, soul and divinity?

Excuse #7. “I don’t like other Catholics.”
Ugh (shaking head in regret and sadness)! I’ve actually heard this–that too often, Catholics rush out the door after Mass without making eye contact, rushing home to catch the football game or run to the mall. Missing sometimes is the friendly outreach that is common in some Protestant communities. Here a cultural shift may be in order: Could you start the ball rolling, making a friend by being a friend?

But suppose that one or all of the above “excuses” are true. What if your parish never changes, you never hear a great homily, you never get a free donut, and there’s never an effort to start a street mission or a bible study? The Catholic Church, as Pope Francis has said, is a field hospital for sinners; what if those sinners just really get on your nerves?

In that case, there is still one benefit which overrides all the little problems at your parish, and in the Church as a whole:  Jesus.

Jesus Christ, the Second Person of the Blessed Trinity, is there. He loves you just as he loves all those other sinners, those unworthy Christians who are muddling along together on the path toward union with Him.

If receiving Christ Himself into your person in the Eucharist, if resting comfortably in the knowledge that your faith is built on the shoulders of giants, that the Church you attend has been given Jesus’ own guarantee of infallibility, can’t override the inconveniences of sitting in an ordinary pew beside ordinary people, then what in the world can?