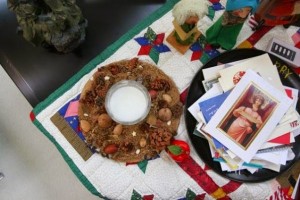 We have a large family, as some of you know.   We have seven sons.I am very sentimental about things all of our sons have made and brought home all of the past years.  If we had not had a flood in Santa Barbara in 1969, and lost almost everything thing, I would be dead today buried in the debris of pictures, and drawings, and notes, and birthday cards from our children.  Can you imagine how high my collection would be of all of the work of their little hands?
As the boys brought things home from school or church at Christmas holiday time, everything found its place in the living room where the Christmas tree always was in the Santa Barbara home.   Their decoration became a “special” decoration of that year, and was displayed either on the coffee table or at least in clear view . . .often on the tree that was almost twenty feet tall.   The tallest tree was always the Fenwick tree because we had a two-story living room.  It was a magnificent tree and we loved to make everything lovely.
One year, one of the boys brought home a little wreath with small acorns clued on a round piece of corrugated cardboard.   It was fresh and really sweet, though not a decorator showcase piece; it was placed on the coffee table with a fresh candle in it.
That first year, as the tree was taken down, and the decorations all stored for the next year, the wreath was wrapped up gently in tissue to be used year after year in some spot, though no longer the coffee table in the living room.   Just like most of the homemade ornaments always needed a touch of glue each year, the wreath would get a little touch-up, but never changed from it’s original state.
We moved from Santa Barbara in 1972, and one time, about ten years later, when we were putting up the tree, just like every year, out came the wreath.   Not too worn . . . but old, by now.   I opened it carefully and said, “Ah! Here is the wreath.”   My husband smiled and said, “Who made that wreath, by the way?”  “Hmmmm,” I thought . . . I would have to look. Lifting it up over my head, I read, “JACK.”
We have a Ted, a Tom, a Tim, a Larry, a Michael, a Christopher and a Jonathan  . . . but we have no Jack.
My husband and I stood and laughed until tears came down our faces.  Here we are, two sentimental people with Jack’s wreath, and somewhere a mother received our son’s wreath and possibly heaved the little cardboard wreath that first year.
I have no idea how long we have had the wreath.   It was high and dry during the flood so it could be as old as 1964, give or take . . . but we still have Jack’s wreath.  We now live in Half Moon Bay, and with great joy, every year we open the tissue very carefully as we say, “Ah . . .here it is, Jack’s wreath!”    We will open it tonight, my husband and I, as we do the tree alone, now.  Jack’s wreath goes on the grand piano; because it is grand to us . . . it stands on a glass plate with a red candle in the center.   Sometimes on Christmas Day, we put it on the coffee table because we like to remember Jack, whoever he was.   Our children now in their 30s and 40s always ask about Jack’s wreath.   They simply say, “Where is Jack’s wreath?”
No one knows who Jack was.    Just a boy in a school where our children attended.  He may not even know who Jesus is.
So today, Lord, I pray for Jack, and others like him, who may not know you; that you will have your Spirit hover about them and bring them to a fullness of you, knowing you, and why we do these funny things  . . . like decorate trees, give gifts, and make wreaths out of acorns and corrugated cardboard . . . and save them . . . tenderly . . . oh so tenderly.

Terry Fenwick is a Catholic wife, mother and grandmother. She had two great husbands, who are both in heaven.  Between them Terry has been blessed with seven sons and 15 grandchildren. Terry is a convert to the Catholic faith and she continually inspires many through her blog http://terryfenwick.blogspot.ca