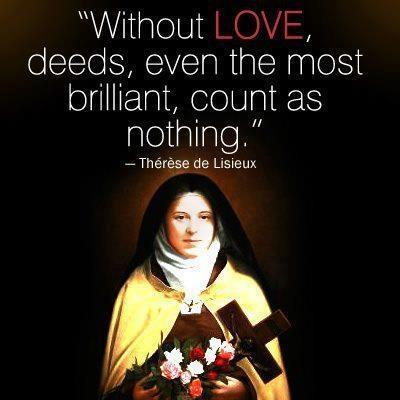 The inspiration for my New Year’s resolution came to me as I cautiously steered my car along a snow-covered, traffic-snarled road on my morning commute. The snow continued to fall, the roads were a congested mess, and the misery of impatient commuters added to the general unpleasantness of the day.

It was the perfect scenario for complaining about my lot in life: the remnants of a cold that didn’t want to leave me, the stressful drive to work, and the busy day ahead. My pity party was just getting started.

Staring out the car window (because traffic wasn’t moving), my mind wandered to the book assigned by my spiritual director, The Passion of Therese of Lisieux. Although she is my patron saint, St. Therese was never one of my favourite saints; but when my spiritual director advises me to read a specific book as he places it in my hand, I know better than to question him.

The account of St. Therese’s final months and days is fascinating. It shows how a young woman so desirous of God bore her excruciating pain and suffering with good cheer and fortitude, never losing concern for those around her. In the midst of great difficulty in breathing that was alleviated only by sitting up with arms extended in the form of a cross, and propped up on the shoulders of two supporting Sisters, St. Therese somehow managed to utter little puns and word plays that elicited laughter from those surrounding her death bed. In her concern for the Sisters, she wished to alleviate their sorrow at her imminent death.

But St. Therese was only human and “like any other sick person [she] suffered, groaned, and cried. Then she would doze off to sleep, have nightmares, or know insomnia while all around her were sleeping. Like many others – the vast majority – there were times when she felt incapable of praying, incapable of saying or having ‘beautiful thoughts.'”

Still, unlike most of us, even in her agony Therese always saw “the good side of things.” Her explanation for her constant optimism was simple: “I should not be as I am if the good God did not make me see that the only joy on earth is to do His Will.” In her steadfast desire to love God, she offered Him everything knowing that abandoning herself totally to Him would please Him and save souls.

As I sat in traffic bemoaning my misfortune, it finally occurred to me that I was wasting a golden opportunity. What would St. Therese do? Why, offer it up, of course. And she would probably throw in a play on words for good measure. So in the spirit of my patron saint, I offered up the frustration of the morning and prayed: “Lord, if this is what you want for me right now, then I offer it up for whatever You want.” Immediately, I felt much calmer and more cheerful.

And that’s how I arrived at my New Year’s resolution. St. Therese taught me that the only good resolution is one that leads me closer to God and has as its goal only to please Him by an act of total abandonment and humble offering. Therefore, instead of wallowing in self-pity, I resolve to quietly, joyfully, faithfully, humbly offer up the inconveniences of daily life, the aches, illnesses, and pains of my imperfect  aging body, and all the other little and not-so-little crosses the Good Lord wishes to give me. With God’s grace I will offer them up for the love of Him and the salvation of souls, all with the help of my patron saint whom I love more and more.