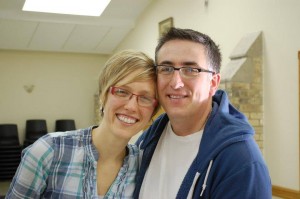 We’re celebrating our 10th anniversary this year, a gigantic milestone for our secular culture as we’ve been married almost three times as long as most celebrities and 226 times longer than Brittany Spears’ first marriage (it only lasted 55 hours).  When people find out that it’s a “big one” for us, they inevitably ask what our secret is for a happy marriage and I must confess that I don’t have one.  I don’t think there is “a secret” to happy marriages.  Good marriages come in all shapes and sizes and can be based on just about anything of which you can imagine.  I suppose if pressed to give you a basic recipe for a good marriage, it would be this.  There must be love – a solid, unshakeable love that can weather tornados and sunny skies, calm seas as well as shipwrecks.  Second there must be a never-ending ocean of forgiveness.  Third there must be healthy doses of humility and forgetfulness (especially for those of us blessed with an ‘elephant’s memory’) and fourth, which perhaps I should have mentioned first, we must call down Divine Help for every moment, but especially for the times when we’re at our ropes’ end, unable to turn to anything or anyone except the Maker of All Things for help and guidance.  After that, the sky’s the limit for the makings of a good marriage.

It’s all very fascinating though, isn’t it – the makings of a good marriage?  I’m wholly intrigued when I come across couples that are making things work – and thriving within their marriage, most especially when they’re doing so in unconventional ways.  Like this couple: two self-described economics nerds who pay each other for everything from chores to childbearing.  They’ve established this rather elaborate bidding system based on game theory and behavioural economics (around which I had a hard time wrapping my brain) in which they assign value to just about everything, in the quest for equality, autonomy and fairness in their marriage and life together.  They’ve completely separated their finances and record, in little black books somewhere, how much they owe each other, and how much they’re owed for the daily offloading of their “shared goods or services”.  At the time the article was written, Mrs owed Mr $80,421.10 from when she attended grad school, but they were in negotiations in order to “pay” her for the fact that she gave birth to their two children – mulling over whether to give her a “lump sum payment to fix the imbalance.”  If there were a sixth love language, for these folks, it would be money. 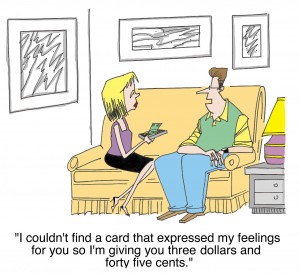 But to my mind, it’s all rather jarring.  I mean paying your spouse to do dishes, put the kids to bed, take trips to Taco Bell or even bear children, to me, seems fruitless and unproductive if you’re a team, one in mind, body and spirit.  It sounds mercenary – weighing and measuring every. little. thing. down to the last ounce and milligram.  And it doesn’t sound much like love.  It seems more like cold-hearted capitalism – not so much a “love and honour and cherish until death does you part”, but rather a “sign on the dotted line and you will get what you want” type deal.   Can a marriage survive in that kind of environment?  What happens if your marriage ceases to give you what you want?

But beyond the havoc this type of attitude might reap within yourself, your spouse or children, what kind of view might this attitude inspire in reference to God and the higher realities of life?  Not everything is fair – in fact, life is decidedly unfair all the time in every which way.  Might this elevation of fairness to god-like status contribute to an inability to deal with the unfairness of life?  And what about God?  Since grace builds on nature, might you be tempted to think that God acts just as we do – tempted to think that he is an exacting God, and that we can somehow bid or buy our way into heaven if we just fast and pray enough?  That simply isn’t true.  Everything, absolutely everything, in the spiritual life is available and given to us – pressed down and running over – utterly free for the taking if we have the eyes to see and the ears to hear.  “Everyone who thirsts, come to the waters; and you that have no money, come, buy and eat!  Come, buy wine and milk without money and without price.”  (Isaiah 55)  The economics of the spiritual life are in direct opposition to the economics of the earthly marketplace.  As Catherine Doherty says in her thoughts about fasting, “We do not say, “Here are my sins Lord, and here is my payment or atonement for them.”  No.  We fast to seek the face of our Father.”  We’re not “hail-mary-ing” our way out of purgatory or building up points with Jesus to get out of hell free, things just don’t work that way.  We must love.  Period.  And love isn’t exacting or mercenary and in the immortal words of the Beatles, you can’t buy it (or sell it for that matter).  For obvious reasons, it could be seriously detrimental to the spiritual life to fall into thinking that anything other than love will get us into heaven.

Yet on the other hand there may be benefits to their system, a little method in their madness – not least of which would be assigning actual value to deeds that are often overlooked by mainstream society.  Actions like household chores, child bearing and child rearing are rarely seen as valuable, or even (the mind reels) as work, these days.  This system of bidding and buying could make it very clear to both spouses that the contributions of each partner are legitimate, seen and appreciated.  This system also has a built-in way of gauging how important each individual job is to the other, which could be a good means of communication between spouses.  If Mrs is feeling overwhelmed, Mr might be able to tell by her bid and they may be able to talk it through and make changes if necessary.

But I’m just going to say it.  This would not work for my husband and I.  For me to adopt these practices or something like them would ruin me.  Love would become a farce – a series of weights and measures, fairness and money would become gods in their own right and gratitude would become nonexistent.  As Ann Voskamp said, you aren’t actually thankful for something if you think you earned it.  That’s pride, not gratitude.”  I don’t write Walmart a letter every time I buy something there.  A fair-n-square exchange happened.  They wanted a certain amount for something, I thought that was fair and paid it.  What is there to be grateful for?  Nothing.  And isn’t gratitude a very important part of love?  Absolutely it is.  No, for me to flourish in my marriage, love – which for me means time spent with my spouse, physical affection and deeds of service – must be freely given, freely received and unconditional.  In our marriage, my husband and I give 100% all the time.  There’s no 50-50 split or a little black book recording how many times he did the laundry and how many times I’ve done the dishes.  We just do what we need to do, in the moments we need to do them, for love of one another.  We don’t always do them WELL, mind you (there **may** be a bit of grumbling here and there) but at least we do them freely – which speaks love to me in a language that doesn’t require words.  If you read the more in-depth version of this couple’s way of life, they insist that they have ways in which to incorporate “free love” into their relationship, yet I couldn’t see how.  I still found their ways of loving each other exacting.  For me, real and true love would not survive within that framework.

But what do I know?  I’ve only been married 10 years.  And perhaps your life experiences have given you a different philosophy to go on, just as this couples’ experiences have given them.  If so and things are working well for you, then God bless you!  I suppose that as long as the love between you and your spouse grows in some way every day, that there is room within the micro-economy of your family for God, and that your non-spiritual practices are in line with your spiritual practices then good on you!!  On second thought maybe I do have a secret to a happy marriage after all.  Find out what works for you and your spouse, and then do it wholeheartedly and without reserve.  This couple is, and so far it’s worked for them.