Not How You Planned it? 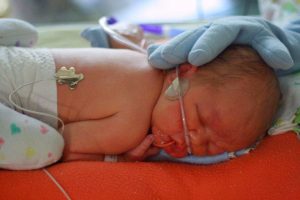 After two nights of contractions too strong to let me sleep and too weak to really get me anywhere I headed to the doctor for a “check”.  A few days earlier I had mentioned to a friend that something felt *off*.  The doctor said I was definitely in “early” labor and was dilated to 3 which, for me, could go on for weeks.  That evening we did our normal things, dinner, bedtime, walking.  When we got back it seemed like the contractions were closer and more “real” but I didn’t want to get my hopes up so I took a bath thinking they would stop.  They didn’t.  I layed down thinking they would stop.  They got closer.  At 37 weeks 2 days I didn’t think there was any way I would be in labor on my own.  Still the contractions got closer together and harder to take so around 11pm we were off to labor and delivery.  Once there my water broke and I knew we weren’t going home.  The baby would be born and soon. We called my parents and let the older children know we were in it for the long haul.   After months of trying to decide if I should have a VBAC or not it seemed like the decision had been made for me.  We were put in a room and things got going.  Then they stopped going.  Normal for me. Except not normal was how I felt.  I felt like I had the flu.  I was feverish and worn down and my anxiety was through the roof.  I confided in the nurse about the stresses of the past year because I was sure it was affecting my ability to labor well.  Never one to be totally optimistic I also wouldn’t say I was pessimistic (especially in a case like this) but I felt fearful that the worst would happen and that the baby was in danger.  They started pitocin a little at a time to help contractions along but instead the baby’s heartbeat would decelerate with each contraction.  Off and on went the pitocin all night.  Up and down went his heart beat.  Finally we decided it was time to do a repeat csection.  By that point I was so exhausted, I’d had one failed epidural and another that only took part way.  I hadn’t eaten in days or slept either due to the early labor from the days before.  This was not how I had planned it.

Earlier in the week I had been reminded of the Bible verse Jeremiah 29:11

“For I know the plans I have for you” declares the Lord, “plans to prosper you and not to harm you,plans to give you hope and a future.” 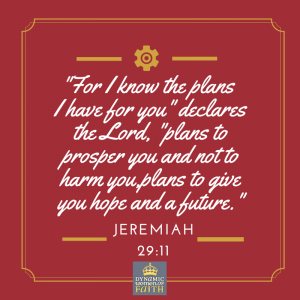 The verse ran through my head again and again.  Friends texted and telephoned prayers and support.  After the decision to have the csection was final I thought “he will be here soon and this will all be a memory”.  I remembered most things from the csection I’d had 13 months earlier.  This time I wasn’t as nervous about them cutting me open but I did have other issues.  I set the record for vomit in the delivery room (true story) and I prayed so hard that I would hear his little cry letting me know that everything was OK.  Within a few minutes he was out and crying but everything was not ok.  They brought him to me for 1 second, said I could kiss him and that he would be going to the NICU for a few hours.  So I got sewed up and sent to recovery with no baby.  I am not the first to have this happen, I know, but this was the first time it has happened to me (I’m incredibly lucky).  But sitting there with no baby felt wrong.  Within two hours I was on my way to my own room.  They rolled my bed into the NICU so I could see my sweet guy for just a minute.  I touched him gently and wondered if he was really mine at all.  Then it was time to go.  At our hospital they play a lullaby when a mom rolls down the hallway with a new baby.  They still played the lullaby as I was wheeled into my room but I didn’t have the baby.  After all that had happened that day I was incredibly groggy.  My head was pounding and I was sick to my stomach.  I texted and posted on facebook for prayer requests and my friends did not let me down.  I know if not for those prayers I would have been completely lost. I tried to pray and I slept but each time I woke up I checked for the baby who had occupied my tummy for all of those weeks.  He wasn’t there anymore.  I sent Jesse down to the NICU a dozen times that afternoon and evening.  My headaches increased and I could no longer sit up.  It was clear I had a spinal headache from the epidural.  Not only was I separated from my baby but I couldn’t even sit or stand.  This was not my plan.

“And we know that in all things God works for the good of those who love Him, who have been called according to His purpose”. 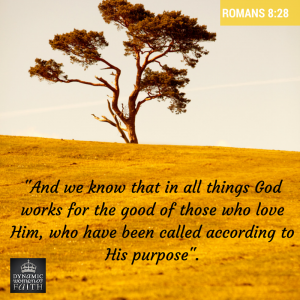 Trust in God is what I have learned this past year.  Trust.  While I was pretty sure the baby wasn’t in terrible danger of death what did I know?  I only know that whatever was to happen it was God’s plan and I had long ago promised to accept His will.  As a favorite song of mine says (Jesus) “won’t lead me where You won’t go”.

Day 2 arrived.  Still no baby in my arms.  Still a headache the likes of which I had never known.  Hannah came and I attempted to visit the baby with her.  I could not sit.  My ears rang and my eyes couldn’t focus.  My baby lay there helpless, scared, and with a million wires running in and out.  I cried so much that day the insides of my eye lids were bright red.  I remembered what a favorite priest of mine had preached for years – to “suffer well”.  To use our suffering for the good of others.  I don’t know that I did that so successfully but I tried.  I took in prayer requests and as I lay on yet another operating table for my blood patch to help the headaches I listed them in my head.  I prayed for Mary’s intercession and St. John Paul II, Padre Pio, St. Augustine, St. Monica.  At the end of day two I still hadn’t held him.  But I could sit up to pump milk for him and I could touch him.   My guys at home had come up for a visit.  Oh how I missed them and how I was torn between the two worlds.  I couldn’t be with any of my children.  I knew for me it was temporary and for some people it is not.  I had long since learned to praise Him in the storm and so I did.  But I questioned Him too because that’s who I am.  I asked why.  Had I not suffered enough this year.  I knew it could be worse but really.  Why.  No answer came. I had to trust as I said I would.

The next day my headache was gone and I could walk well.  I must have walked to the NICU eight or ten times.  That night they let me hold him for the first time.  It was like heaven on earth.  How had I taken these things for granted for so very long?  I wanted to nurse him and bundle him and put his little hat on.  That was my plan.  Still I took in what I could.  That night I spent nearly the whole night in the NICU with little Superman.  It was decided that he had contracted an infection from my amniotic fluid during labor and it had rapidly spread to his lungs.  He was put on antibiotics, oxygen, a feeding tube.  The next day I woke up and the headache was back with a vengeance.  It was a Saturday.  The pain clinic that did blood patches was closed until Monday.  To pump milk for the baby I had to literally hang over the bed.  My head was wrapped in diapers filled with ice.  I cried.  Alot.  This seemed like a bit much.  I was back to not being able to visit him.  I couldn’t see my other kids.  I couldn’t eat.  My nurses were amazing.  That’s about all I remember from those two days.  Eucharistic ministers brought in communion.  For those days that was my only Food, basically.  It gave me comfort and strength.  By Monday afternoon when I got my second blood patch it seemed Augustine was out of the woods and ready to nurse.  I needed desperately to be able to sit up.  The second blood patch was more traumatic than the first.  It took three times to find a place to get the blood from all while I had a needle in my back.  I knew I was being lifted in prayer.  I could feel it.  I was grateful.  Last night I got to nurse Augustine for the first time.  I wasn’t sure how he would take to it.  He was already 5 days old.  It turns out that was an unnecessary worry.  He latched on immediately and is a pro now.  So every few hours I shuffle down to the NICU and haev a date with my little guy.  I’m hopeful that the blood patch will last this time and the headaches will stay away.  Augustine seems much improved and he’s losing wires of IV’s and other meds by the hour.  I was able to go home today for a little while between feedings to see the other kids.  I miss them.  I miss the chaos, the homeschooling, the mess, cooking, the laughter.  Frances is full on walking.  Hannah has run the house beautifully.  Friends have dropped off meals and taken kids.  My parents have been back and forth.  I haven’t really seen anyone.  The headaches were too bad for visits.  In the midst of all of this our Katie turned 14!  Friends and family ensured that she had a good day.  I cried.  But I learned, again, that I am NOT in control.  And I don’t have to be.  God is and when we trust him things do work out ok.  We are still in the hospital and this is NOT what I had planned but somehow in the end it will be better.

For all of you NICU parents and families out there – God bless you.  This has been quite a ride and it’s not over yet.

Thank you to friends, family, strangers, everyone who prayed and are praying for us.  I truly, truly believe that prayer is powerful.  Keep praying.  I’m terrified the headaches willl return.  I am praying for all of you.  Even if I don’t know you, God does.  He knows what you need.  For my awesome kids who have kept me company via FaceTime and texting, who have kept the house running, and who taught my other baby to climb down the stairs all by herself – thank you.  I love you more than you can ever know.

So here’s the nitty gritty :

All Glory and Honor and Praise be to God.

Amy Ekblad is a homeschooling mom of 12 children on earth and 9 angels in Heaven.  Last year while pregnant with her 12th child she completed her Bachelor’s Degree proving once again that all things are possible with God. Follow her family life here at http://www.ekblad9.blogspot.com