The Black Madonna & the Priest in a Wheelchair 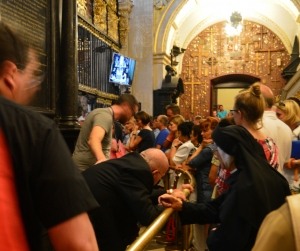 I’m writing from Czestochowa! Today, we prayed the Mass in the Basilica where the image of the Black Madonna is located. They usually rush you through, but we have an extra priest on our pilgrimage who is handicapped, and his wheelchair got stuck right at the walkway/perimeter that goes around the interior of the Basilica. That meant we were almost to the altar and Mass was taking place. We couldn’t move forward because the wheelchair couldn’t go forward. We couldn’t go backward. The line behind us was long, and only moved in one direction. Forward.

We were in a quandary. What do we do with Father’s wheelchair? How do we keep the line moving so as not to disrupt the Mass taking place right on the other side of the little rail?

We have some young men on pilgrimage with us, and they ran to his aid. They lifted and carried the elderly priest twenty feet or so and collapsed the wheelchair to get it through the narrow passageway. So the rest of us behind them were waiting, on our knees, in front of the image of Our Lady at the very moment of consecration.

If one has to be stuck somewhere, that’s a pretty good place to be stuck.

I watched the young men. These handsome, fit Catholic knew how to take care of a priest, how to honor his dignity, how to throw open the doors to pilgrimage for one the rest of the world would have told to stay home.

But as Catholics, we get it. We hunger for this one to have access to the mysteries of the Kingdom. He has brought us Jesus for years and years. And today, as he let the men carry him, as his face registered nothing but joy in seeing the Black Madonna and the Basilica and the moment of Consecration—my heart sensed a very specific charism.

Saint John Paul II had taught us all many things. He had taught us to love all life, to respect and honor our priests who love God and are devoted to the Blessed Mother—and he taught this aging priest how to age and submit humbly to the indignities of life—because it is in that moment that the Holy Spirit brings divine dignity to the situation.

I watched as they rounded the corner, as the wheelchair passed a sister in full habit, how she reached out her hand to the priest and said something with a smile on her face. She was saying thank you, even though I don’t know what she said exactly. She was honoring him for having the courage to keep saying yes to God.

It was a moment.

A moment between a priest and a dynamic woman of Christ.

And I cried some more.

When we were ushered into a private room so that our priest could have a few minutes to recover from the ordeal, I went to him, and I, too, said thank you. He smiled and asked me if I wanted a priestly blessing.

And I knelt at his wheelchair, the one that had tried to give us some fits before the miraculous icon of the Lady of Czestochowa. And I felt his hand upon my head. So steady. So filled with power.