Kairos: the Crook of God’s Finger

The Greek words chronos and kairos always remind me of Frank Kermode’s book The Sense of an Ending – required reading for M.A. comprehensive exams at Southern Illinois University at Edwardsville. Not that I wrote anything profound that awful day. I received a B on my comprehensive exams though I had trended toward A’s throughout graduate school. I choose to blame my performance on the migraine that rendered the experience a blur.

I remember three writers from the long list of required reading for comprehensive exams. Four Quartets by T.S. Eliot. The Writing Lifeand Pilgrim at Tinker Creek by Annie Dillard. And Frank Kermode’s The Sense of an Ending.

I might have known that I was headed for a massive conversion –for I have forgotten most of the other things I read in the months of preparation for comps, but the things that remained and took up residency in my long term memory were Annie Dillard, T.S.  Eliot and Frank Kermode. If you took Pilgrim, Writing Life, Four Quartets and Sense of an Ending and ground them up with a mortar and pestle, you might end up with words like Catholic and 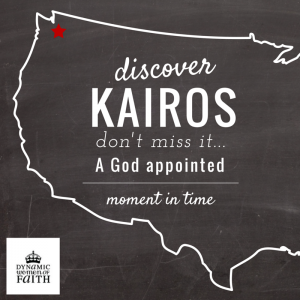 mystery and contemplative and writer.

It is where I was headed – though I didn’t see it coming.

But there is something about the notion of kairos. A time for each thing. A season. A changing-over and rendering-up. Dropping nets to follow. Or abandoning the now for the unexpected call. The sense of an ending. And of a beginning.

When you talk about such things, others stare. They don’t get it. They don’t sense the crook of God’s finger. The hook of the Shepherd’s staff. They see no mandate to go. To follow. To pick up a pen. Or a cross. Or both.

There is something beautiful – and painful – in accepting the call one receives in these kairos moments.

The most one can hope for is for one’s spiritual director to affirm the call. It’s enough. A nod from him and a nod from grace– that’ll do.

It’s not that the miraculous is about to happen, just His holy will for you. And maybe that is miraculous, in the ways that healing and wholeness and deliverance and restoration are miraculous. Somehow, you know it. You begin to perceive it.

The words on the blank page are written in invisible ink – the kind of ink that fills God’s pen. And your spirit is the secret decoder that unlocks the hidden script. You see the words. And you begin to realize– so that’s what I’ve been called to do. That’s where I am called to go. It’s been that all along.

You drop your nets and walk away from what was to embrace what is to come.

It is the moment you are ready for God’s plan for you.

Not tick-tock clock time. Not the hour of a particular day of a specific month of the year. Not chronos. This is Kairos.

A season. The season for changing. And now is the acceptable Kairos.

It’s Lent. Repent and believe the good news of the Gospel of Jesus Christ. Ground everything down with your own mortar and pestle. And offer that to Our Lord.

Yes, now is an acceptable time.