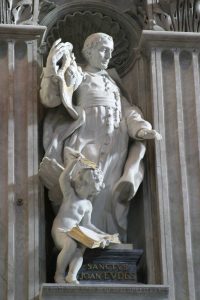 On August 19, the Church in the United States observes the optional memorial of St. John Eudes, French preacher and vociferous opponent of Jansenism.

St. John devoted himself to helping France’s “fallen women,” eventually founding a new religious order for them, the Sisters of Our Lady of Charity of the Refuge.  In 1666, the Refuge sisters received permission from Pope Alexander III to establish an institute to reclaim and rehabilitate wayward women who repented of their sin.

Among his many accomplishments, in 1668 John composed the Mass of the Sacred Heart.  Here, for your listening pleasure, is the Gloria from that Mass—sung by the Benedictine sisters of St. Cecilia’s Abbey.