If you are anything like me, you might have found yourself so busy the last few days that you missed making pancakes on Shrove Tuesday and are frantically texting your kids, 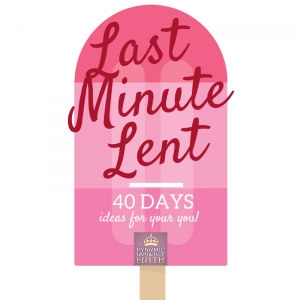 Lately I have been facing a crazy number of meetings, work related dead lines and pressures. Throw on top of that; laundry, grocery shopping, my son’s hockey, house cleaning, university applications, meetings with our accountant, arguments with our mechanic – a car that has died (we not sure if this is just purgatory for it), making dinner and fighting the February blahs and believe it or not – Lent just sprung up on me. Today being Ash Wednesday, I had to remind myself that it was not too late, it fact in had only begun!

This year – I am trying to remind myself that my Lenten resolutions should not be selfish. You know  the drill

–“I am going to stop eating sugar, or gluten – that way God and I will be both happy because I will loose weight.”

“God what do YOU want me to do for Lent?”

Right now I am prayerfully brainstorming a list of things we have done in the past as a family, throwing in some new things into the mix.

1. Go to Stations of the Cross as a family. We have done that since the kids were born, navigating sports commitments at they grew older became tricky, but it is amazing how many parishes have the Stations at a doable time.

2. Commit to watching faith based movies. When the kids were little, as a mom, I immersed them in the CCC saints videos. Every family I believe should invest in the entire set. Now that the kids are older, I have to take the time to invest in movies like God’s Not Dead. I found a great list of movies to watch during Lent on the internet today! Personally, I hate watching television – one Lent the Good Lord in His wisdom called me to actually watch television with my family during Lent because I hated it so much! It was a real sacrifice, but it bore much fruit (long story).

3. Sharpening up on morning prayers.   At my last Mother’s Group, Father Terry Mc Kenna gave a talk on the importance of morning prayers. Most of the moms’s were stunned when he suggested a morning ritual of prayers that would involve at least a half hour to 45 minutes. Many of the mom’s were scratching their heads and dropping their jaws, wondering how they were going to fit that into their already crazy mornings. Have you evaluated your morning prayers? Or your prayer routines throughout the day? Are your kids doing their morning prayers? Read this to get you thinking a little more.

4. Listen to Catholic radio & attend a Lenten mission    The program that is airing today on Radio Maria at 2pm is filled to the brim with Lenten ideas. Why not give it a listen? You can listen to it by clicking right here. Remember that both the Dynamic Women of Faith conference and Calling ALL Girls event are both being held during Lent! They have both been created with a view to kick start your Lent with graces over flowing.

5. Make a list of people you can help.   I love using the Lenten season to get caught up on ordering masses for people, both people living and deceased. Another idea is to make a list of things that have been eating a away at your conscience. In my own case, I know I have relatives in Poland that need my financial support and I have been procrastinating sending them money. As goes with a couple of good Catholic charities – charities that I love.

Remember all of your efforts to respond to the call of God will be blessed. What is God calling you to do this Lent?