I recently was asked by someone to explain why the Church didn’t elevate women (as priests etc.) in the early days of Christianity. This is the part in the conversation when internally, I start to look like an old Bugs Bunny cartoon with steam rising from my ears and my face turning fire red … but, I love the chance to explain the true teachings of the Catholic Church, so with a dry mouth, I took a deep breath and jumped in.

I explained history during the time of the early Church.  During that time, it was not uncommon for pagan churches to have priestesses who would use sex to increase the number of male followers.  The early Catholic Church saw women (and sex) as something precious and holy.  Women were not a tool to be used for their bodies. Yes, Christ and his apostles were men, but Mary the Mother of God, Mary and Martha Magdalene were certainly very visible and important in Scripture.

One of the biggest indicators of the role of women in the early Church for me, however, is how often Christ revealed His divinity to them or they recognized it on their own. 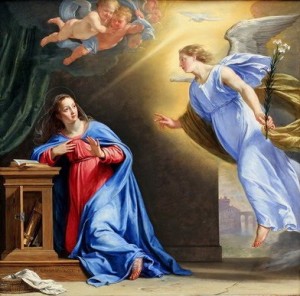 Mary is told by the angel Gabriel, “He will be great and will be called the Son of the Most High; and the Lord God will give Him the throne of His father David,” (Luke 1:33,32) in the description of who the child, Jesus, she will carry will be.  She gives her ‘fiat’ immediately accepting the huge honor of carrying the Savior.  Upon her own assumption into heaven, tradition teaches she is honored by the angels and saints alike.  In fact, this fully human being, becomes the Queen of heaven and earth!Elizabeth, Mary’s cousin, recognizes the divinity of Christ in the womb!

When Jesus meets the woman at the well, He reveals His divinity directly to her (at a time when the men

around Him are asking if He is the Messiah and He has not yet clarified it).  She tells Him what she knows of the prophecy.  Then, “Jesus said to her, “I who speak to you am He.”” John 4:26

Martha and Mary Magdalene openly discuss their understanding of Jesus’ power from the time of their brother’s death. “Martha then said to Jesus, “Lord, if You had been here, my brother would not have died.” John 11:21  Furthermore, when Mary finds the empty tomb and questions the man standing outside it, Christ uses this moment to reveal His resurrection to her first, before instructing her to go back and tell the men. “Jesus said to her, “Mary!” She turned and said to Him in Hebrew, “Rabboni!” (which means, Teacher).” John 20:16

How blessed are we to be loved by a God and lead by a Church who clearly respects and elevates women to such a beautiful, respected and revered status.  We are truly part of a dynamic Faith and we are Dynamic Women of Faith! God bless.