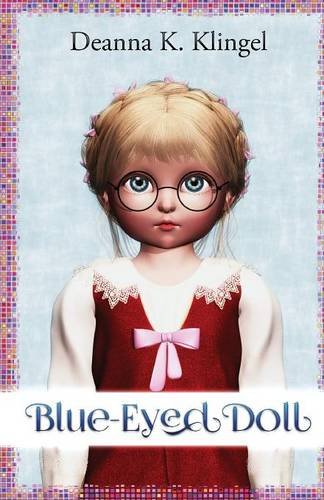 Did you think that the custom of classroom pen-pal letter exchanges and sending “Flat Stanley” on trips around the world made its educational debut in the 21st century? Deanna Klingel’s novel Blue-Eyed Doll tells the story of a very unique cultural exchange that took place 90 years ago!

This fascinating historical novel transports the reader to 1920s California, where students collected dolls to exchange for dolls from students in Japan, and follows the collectible dolls into World War II and its aftermath. Don’t miss Ruth Mary, the gutsy main character–she’s terrific.

The novel begins with feisty Ruth Mary, an eight-year-old, bargaining with her father for the chance to participate in the classroom doll exchange. Her siblings find clever ways to help Ruth Mary succeed in her mission, and many surprises result after the choice of a unique doll wearing eyeglasses.

While I was well aware of the prejudice, imprisonment and other hardships faced by Japanese-Americans during World War II, I had no idea that Asian-Americans in the Western US experienced similar bigotry two decades before the war began. This is an aspect of American history of which I knew virtually nothing. Deanna Klingel, in this novel, explores the general mistrust of all things Japanese that was a hallmark of life in the western states at that time, and one missionary’s attempt to foster friendship and peace.

Readers will be intrigued to learn how prevalent the religious influence was in the public schools and public life of our nation in the 1920s. The author leads the reader on a journey into a time period not so distant from our own, but a very different one.

Blue-Eyed Doll is appropriate for middle-school students and up, and would be a fine classroom read-aloud for students in third grade and up. Don’t dismiss it as “just for kids,” though! Grown-up readers will enjoy it as well; in fact, the author recently read the entire novel to the residents of a nursing home.

Barb Szyszkiewicz is a wife, mom of 3 young adults, and a Secular Franciscan. She is editor at CatholicMom.com. Barb enjoys writing, cooking, and reading, and is a music minister at her parish and an avid Notre Dame football and basketball fan. Find her blog at FranciscanMom and her family’s favorite recipes with nutrition information for diabetics at Cook and Count. Her booklet, The Handy Little Guide to Prayer, is available from Our Sunday Visitor.