Orvieto and The Feast of Corpus Christi 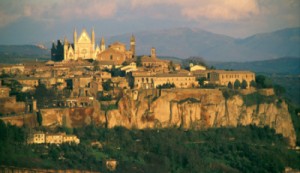 The town of Orvieto is an Etruscan city located in the scenic region of Umbria, between Firenze (Florence) and Roma (Rome).

I first visited the medieval town of Orvieto in 2002, and again in 2006. It’s the eucharistic miracle which is preserved there that I want to tell you about today—but first, let me tell you a little about this picturesque little town.

Getting Up There– Orvieto sits atop a volcanic rock, on a high butte overlooking the plain; and our group rode a funicular, a hillside train, from the valley below. The original funicular, with its water ballast counter-balanced cabin, was replaced in modern times by an automatic line. There is no driver aboard the cabin—just a single operator who manages the computerized system from the upper station.

Troubled History: A City Under Siege– The citizens of medieval Orvieto thought they were safe, up there on that butte. When attacked by other groups, they could fend them off, hurling arrows or axes or rocks over the cliff. What they weren’t prepared for, though, was a long siege. On their fertile butte they could grow corn and other crops, even raise cattle and chickens; but they descended to the valley to get their water.

When many of the town’s citizens died of dehydration following a long siege by the Romans, the people of Orvieto conceived the idea of a deep well. Utilizing a double helix staircase St. Patrick’s Well, as it was named, descended from the upper plain 248 steps to the water level. Families maintained narrower artesian wells, down which they could drop a bucket to retrieve water for drinking, cooking and bathing. In the walls of the deep wells, the Etruscans dug holes which served as dovecotes, encouraging pigeons to nest. At dinnertime, the enterprising Etruscans simply reached into the well, pulled a dove out of the nest—and enjoyed the bird roasted.

Popes In Residence – Orvieto, securely situated and not too far from Rome, was a place of refuge for five popes during the 13th century: Urban IV, Gregory X, Martin IV, Nicholas IV and Boniface VIII. Orvieto’s Palazzo Soliano, the palace of the popes in that city, contains many well-preserved frescoes from 1290 and earlier.

A Crisis of Faith, and a Miracle– Pope Urban IV was in residence at Orvieto in 1263 when a German priest, Peter of Prague, had a crisis of faith. The priest was devout, but found it difficult to believe in the Real Presence of Christ in the Eucharist. He was en route to Rome and stopped at the Italian city of Bolsena, where he celebrated Mass at the tomb of St. Christina. As he spoke the words of the Consecration, blood began to seep from the consecrated Host and trickle over his hands and onto the altar and the corporal.

Shocked, the priest immediately traveled to nearby Orvieto, where Pope Urban listened to his story. The pope asked that the Host and the bloodstained cloth be brought to him in the cathedral. Pope Urban and a number of cardinals and Church dignitaries greeted the procession and had the relics enshrined in the Cathedral at Orvieto. The stained corporal bearing the spots of blood is still displayed there, in a golden reliquary in the Chapel of the Corporal.

Eucharistic Hymns for the Ages – Pope Urban, deeply affected by this miracle, commissioned St. Thomas Aquinas to compose the Proper for a Mass and an Office honoring the Holy Eucharist as the Body of Christ. The hymns which St. Thomas wrote included the traditional hymns still widely used in Benediction: the Pange Lingua (with its concluding verses, the Tantum Ergo), the Panis Angelicus, and O Salutaris Hostia.

One year after the miracle, in August of 1264, Pope Urban IV introduced Aquinas’ composition and issued a papal bull instituting the feast of Corpus Christi (the Body of Christ). 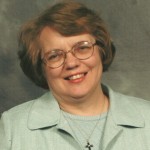